Key to the Magic, and Other Disneyland Resort News

In anticipation of the Disney Vacation Club's arrival at the Grand Californian Resort, it appears Disneyland has finally adopted a perk familiar to members.  Let's examine that perk, and take a look at construction progress on the first California DVC.

Disney has filed for a permit to sell points at its Villas at Disney's Grand Californian Hotel within the state of Florida.  Click HERE to view the status report.

Despite the fact that the project is located in California, Disney Vacation Development must apply for separate sales permits in order to sell within the boundries of most U.S. states.  This is just one of many filings before DVD/DVC can begin selling points at this new location.

On a recent trip to Disneyland, Walt Disney Imagineering Director of Design, Resorts and Facilities Development Mike Montague was kind enough to give us a personal tour of the Grand Californian Villa model rooms, discussing many aspects of the resort expansion and DVC villa design. Montague is a 20-year Imagineering veteran who has played an integral role in creating the Grand Californian expansion.

Well, we're back from our Disneyland / Grand Californian scounting trip!  Fortunately for our readers, it was a working vacation.  Courtesy of several meetings with Disney Vacation Club and Walt Disney Imagineering execs, we're going to have a ton of new information to share this week regarding the Villas at Disney's Grand Californian Resort and Spa.

And just to whet your appetite, here's some brand new concept artwork for the Grand Californian villas: 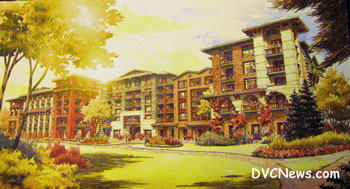 If you put this image side-by-side with the previously released concept art you will probably see some design differences between the two.  Why the differences?  Check back tomorrow and we'll explain--or rather we'll let a Disney Imagineer explain.

Disneyland Buyers to Get 60 Day Priority on VGC

As far back as October 2007 we reported that Disney Vacation Club members who have purchased their points via the Disneyland sales center would have an exclusive priority period to add-on at the Villas at Disney's Grand Californian Resort and Spa.  Now we have additional details regarding this priority window. Add a comment