Disney has confirmed plans to expand facilities at both Disney's Caribbean Beach Resort and Disney's Coronodo Springs Resort, but (so far) no mention of Disney Vacation Club villas at either. 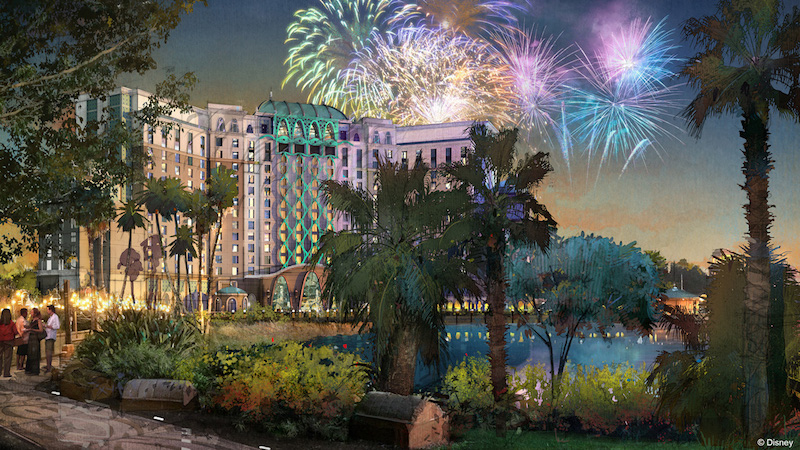 The Disney Parks Blog was used to issue a brief statement regarding upcoming renovations to both Walt Disney World Moderate properties.

Of the two, Disney was more forthcoming regarding its plans for Disney's Coronado Springs Resort.  Along with renovations to exising rooms, a 15-story tower is to be constructed along the shores of Lago Dorado.  Among its 500 new rooms will be suites and concierge level accommodations.  A new rooftop restaurant will provide views of fireworks displays from nearby theme parks.  Resort landscaping will be enhanced "with floating gardens and an island oasis that connects the resort through a series of bridges."

Information regarding Disney's Caribbean Beach Resort is less specific, with only vague mention of improvements to resort shopping and dining facilities.

Disney Vacation Club was not mentioned in relation to either of this projects, which is not particularly surprising.  Disney's timeshare unit is currently selling ownership in Disney's Polynesian Villas & Bungalows as well as Aulani, Disney Vacation Club Villas in Hawaii.  Later this year, hundreds of new villas and twenty-six waterfront cabins will be added to Disney's Wilderness Lodge in the form of Copper Creek Villas & Cabins.

Forces within Walt Disney World management have historically pushed to keep DVC out of Coronado Springs.  With Coronado Springs positioned as Disney's only Moderate-class convention resort, managers had hoped to maintain a focus on leisure travellers and convention attendees.

The Caribbean Beach renovations have been well documented, with the assumption being that new construction is intended to add Disney Vacation Club villas to the property along with a new transportation system.  In the last 16 years, Walt Disney World pursued only two major hotel projects: Disney's Pop Century Resort (2003) and Disney's Art of Animation Resort (2012), both of which actually began construction as far back as 2001.  Over that same span, literally hundreds of hotel rooms have been converted to DVC villas at the Polynesian, Wilderness Lodge, Disney's Contemporary Resort, Disney's Animal Kingdom Lodge and the property currently known as Disney's Saratoga Springs Resort & Spa.

The revelation that Disney plans to invest significant dollars in both Coronado Springs and Caribbean Beach raises some doubt as to the exact Disney Vacation Club involvement in either.

Permits have been filed for both projects and construction is expected to begin shortly.  No completion estimates have been provided.