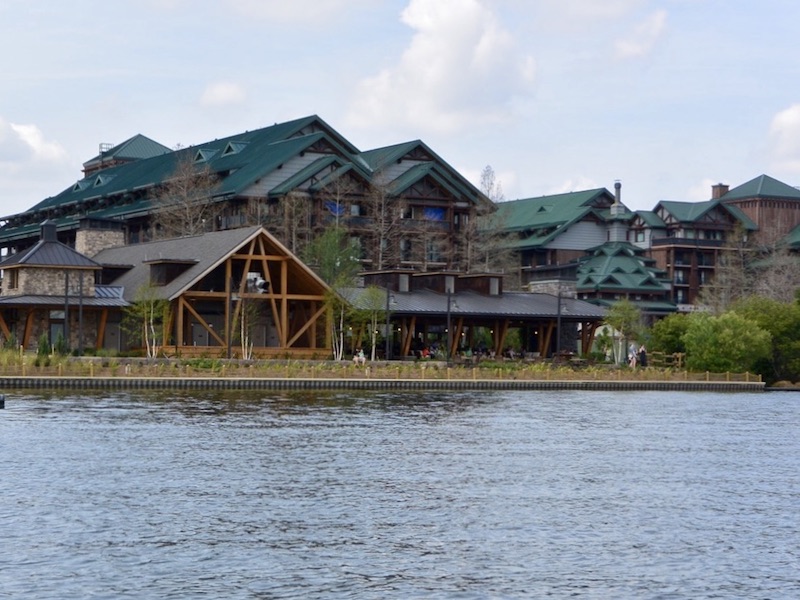 In December 2016, when the DVC Board of Directors approved the 2017 budget and annual dues amounts for each resort, the Board could only estimate what the 2017 property tax amounts would be. It will not until November 2017 that the final tax bills are issued by Orange County. If there is a difference between the estimated tax amount and the final tax amount, a debit or credit will be added to the DVC members’ annual dues for 2018.

Although the final 2017 tax bills are not set, the two components that make up the tax amounts — the property appraisal values and the mill rates — have been released by the Orange County Property Appraiser.

As shown in the chart below, the 2017 property appraisal values for seven of the ten DVC resorts remained unchanged from their 2016 values. The Villas at Disney’s Grand Floridian Resort had a 3.81% increase in its appraisal value and Disney’s BoardWalk Villas had a 10% increase. Disney’s Polynesian Villas & Bungalows’ assessed value jumped from $78 million to $185 million, an increase of 135.73%. This rather significant change is probably due to the Polynesian being fully built out in calendar year 2017. 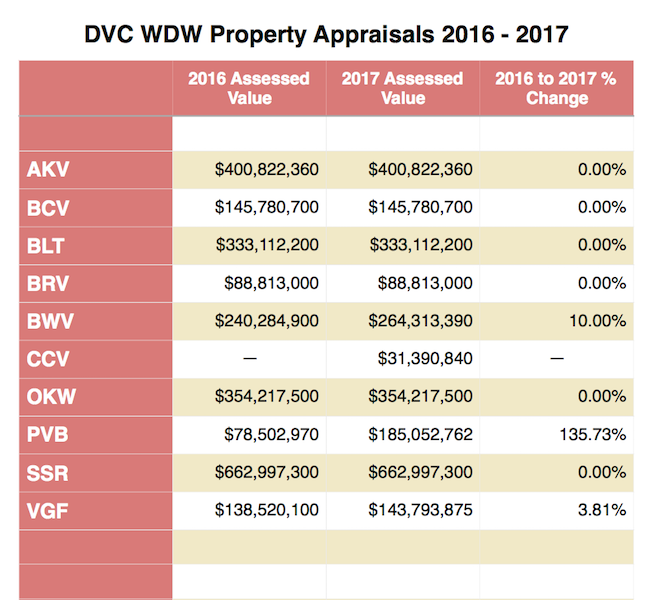 The second component of each DVC resort’s property taxes is the mill rate set be each taxing authority in whose jurisdiction the resort resides. The mill rate is the amount charged for every $1,000 in assessed value. There are seven authorities that levy taxes on the DVC resorts: Public Schools by State Law; Public Schools by Local Board; Orange County; County Library; South Florida
Water Management District; a municipal tax authority (either Bay Lake or Lake Buena Vista); and the Reedy Creek Improvement District. Disney’s Saratoga Springs Resort & Spa and Disney’s Old Key West Resort are located in Lake Buena Vista’s jurisdiction, while the other eight DVC resorts are located in Bay Lake’s jurisdiction.

Compared to 2016, the 2017 mill rates are remaining the same for three taxing authorities and going down for three other authorities. However, Bay Lake and Lake Buena Vista have increased their mill rates in 2017 by 73.67% and 44.85%, respectively. As shown in the chart below, the mill rates have either stayed the same or decreased since 2014, except for the municipal authorities.

The proposed property tax amounts are computed by multiplying each DVC resort’s appraised value by the applicable mill rates. The State of Florida offers a 4% discount if taxes are paid in November and DVC has always taken advantage of this discount. Rows #1 and #2 in the chart below show the 2017 and 2016 discounted tax amounts for each DVC resort. The Polynesian had the largest increase in taxes 2017 due to its increased appraised value. It may surprise some readers to see that property taxes for Old Key West and Saratoga Springs actually fell in 2017 compared to 2016. 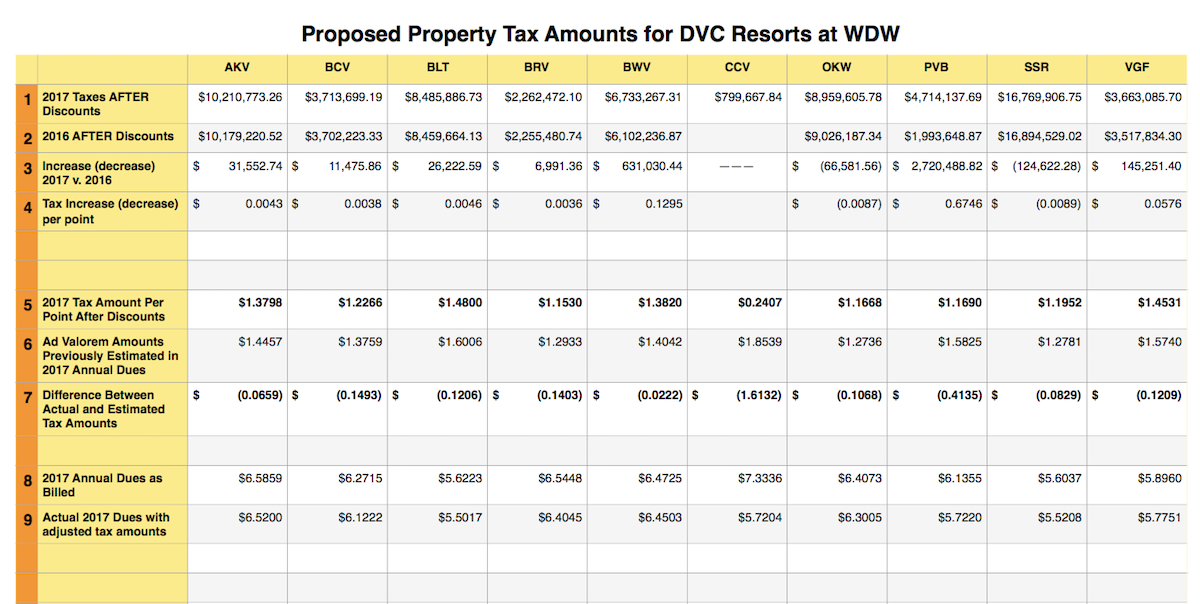 Every DVC resort at Walt Disney World had its tax amounts overestimated, meaning that the DVC owners will receive a credit that will be applied to their 2018 annual dues. Row #5 in the chart above shows the revised 2017 tax amounts per point for each DVC resort. Row #6 shows the tax amounts per point that were estimated in December 2016 and included in the annual dues that were payable in January 2017. Even Polynesian owners, who saw the highest increase in their taxes, will be getting a credit. DVC originally estimated the Polynesian’s taxes would be $1.5825 per point, but that actual tax amount will be $1.1668 per point, resulting in a credit of $0.4135 per point.

There is one final set of public hearings that must be held in September 2017 before the final tax bills are released in November 2017, but it is likely that the proposed tax amounts will remain unchanged. If so, DVC owners will be entitled to small credits on their 2018 annual dues if these proposed tax amounts are finalized.

DVCNews will update this article after the final 2017 property tax bills are released November 2017.