Although construction began back in September 2007, little is currently known regarding the DVC project at Disney's Grand Californian Hotel.  We know there will be a total of fifty DVC Villas and we've seen a couple pieces of concept art.  But otherwise Disney has been rather quiet on the subject.  That didn't stop us from doing a little digging of our own.


Our spies have provided us with an early look at the designs for the new resort.  Below is a mock-up of the proposed floorplan for a lockoff Two Bedroom villa. 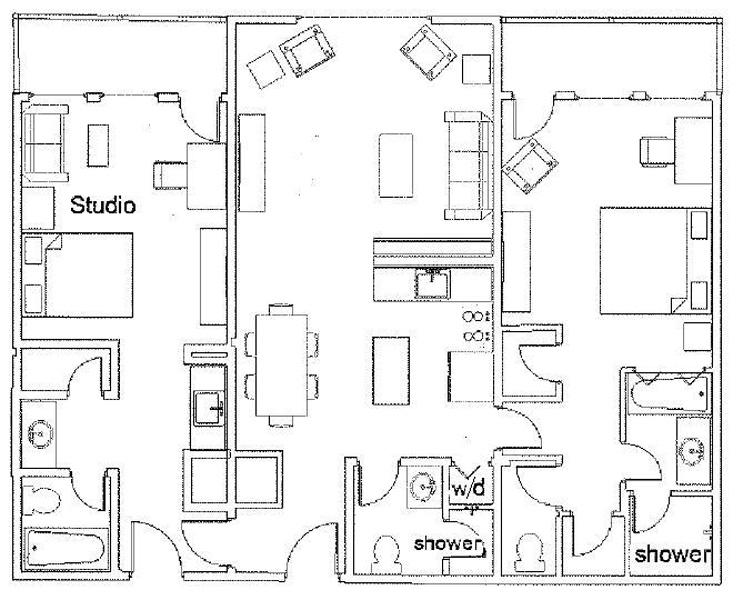 While the new layout is not a mirror image of any previous DVC villa design, it does borrow a number of key features from the new Kidani Village layout with an extra bathroom in One and Two Bedroom villas, larger living room and the addition of a sleeper chair.


Our mock-up does not include a scale, making it difficult to tell exactly how large the unit may be.  In terms of square footage, we suspect it is on par with the smaller DVCs as opposed to the larger AKV units.  Note that while the living area appears to be deeper than others, the balcony has been relocated adjacent to the master bedroom to conserve space.  The second bathroom was added (a 3/4 bath with no tub) while shrinking the main entry and kitchen.


In order to accommodate the balcony, the master suite appears to be a litle more compact and the square jacuzzi tub has been replaced with a more oblong model.


The Studio / second bedroom layout is largely identical to Saratoga Springs, with the bathroom being noticably smaller than the Kidani Village design.


Previously we had reported that the room design would mirror the commonly-used layout of Saratoga Springs, BoardWalk, et. al.  While the layout has, in fact, been altered, we suspect the square footage is comparable to DVC construction dating back to the mid-90s.  Click on the thumbnail below to view a comparison of the three most recent DVC designs.


UPDATE:  Site member "Squidmo" was kind enough to attempt to match the scale of the three floorplans below to obtain an identical scale.  Common features in each diagram (door openings, queen-size beds, bathtubs) were used to present the diagrams in the same scale.  Approximate square footages for each unit are now included as well.

As for the rest of the resort, we can confirm that there will be a total of fifty villas in the new construction.  Forty-eight of them are lockoff Two Bedroom villas, while the other two are Grand Villas spanning the fourth and fifth floors of the Grand Californian.  The Grand Villa floorplan IS identical to those at Saratoga Springs Resort and Spa.


The DVC Villas will actually begin on the second floor of the hotel.  Their elevation should provide some spectactular views for members with all of the villas facing either Disney's California Adventure or the pool complex.  The first floor of the new wing has space allocated to a new Kids Club, resort luggage storage and non-DVC guest rooms.  Two levels of underground parking are also being added with the lowest to be used by valet parking attendants.


As we reported last week, work has already begun on model rooms for the DVC sales center at Disneyland.  We expect to have photos of the model units shortly after they open to the public.


Note that construction at the Grand Californian is scheduled to run into 2009 and these villa designs are subject to change.