As sales wind down for the Bay Lake Tower at Disney's Contemporary Resort, a Use Year has now been established for all of its 5.7 million Disney Vacation Club points.

Disney Vacation Development designates a Use Year for each Unit when it starts drawing points from it to support sales.  There are eight Use Years within the Disney Vacation Club System:  February, March, April, June, August, September, October, and December.  All points in a Unit have the same Use Year and, once designated, the Use Year for the Unit never changes.

On April 18, 2012, deeds were recorded for Unit 91A at Bay Lake Tower at Disney's Contemporary Resort.  With these filings, DVD has now used points from all of Bay Lake Tower's 223 Units to support sales.

The October Use Year, with only 5.1% of all Bay Lake Tower points, is the least common Use Year.

The chart below illustrates the distribution of points by Use Year for Bay Lake Tower at Disney's Contemporary Resort. 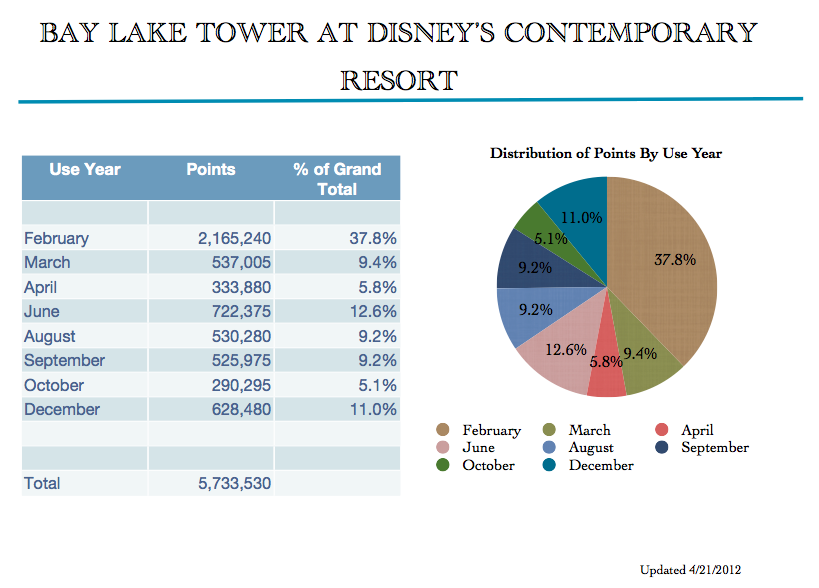 Availability of a given Use Year can impact a member's ability to purchase additional points at a given resort, either via a direct purchase from Disney Vacation Club or via resale transaction.  A DVC owner with a February Use Year will have a relatively easy time adding points at the Bay Lake Tower given that over 37% of all points match the desired Use Year.  October owners face the greatest challenge with only 5.1% of all points providing a match.