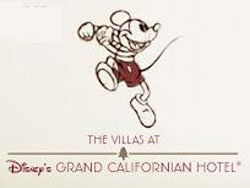 Founding Members at the Villas at Disney's Grand Californian Hotel are being invited to a special celebration entitled the Grand Disney Firsts Event.

Following is an excerpt from the notice sent out by Disney Vacation Club:

As a valued Founding Member, join us at the Grand Disney Firsts Event, where we'll reveal plans for our brand new resort.

From the first storybook castle to the first Disney mountain, the Disneyland Resort has been the setting for dozens of Disney "firsts."  Now, in the heart of the original Disney kingdom, we're excited to introduce The Villas at Disney's Grand Californian Hotel - the very first Disney Vacation Club Resort in the great state of California.

The event will be held at 7pm on March 26, 2009 in the Pacific Ball Room at Disney's Paradise Pier Hotel.  Highlights include an appearance by Mickey and Minnie, refreshments and promotional sales opportunitites.

The Grand Californian model rooms will also be open for viewing during the event.