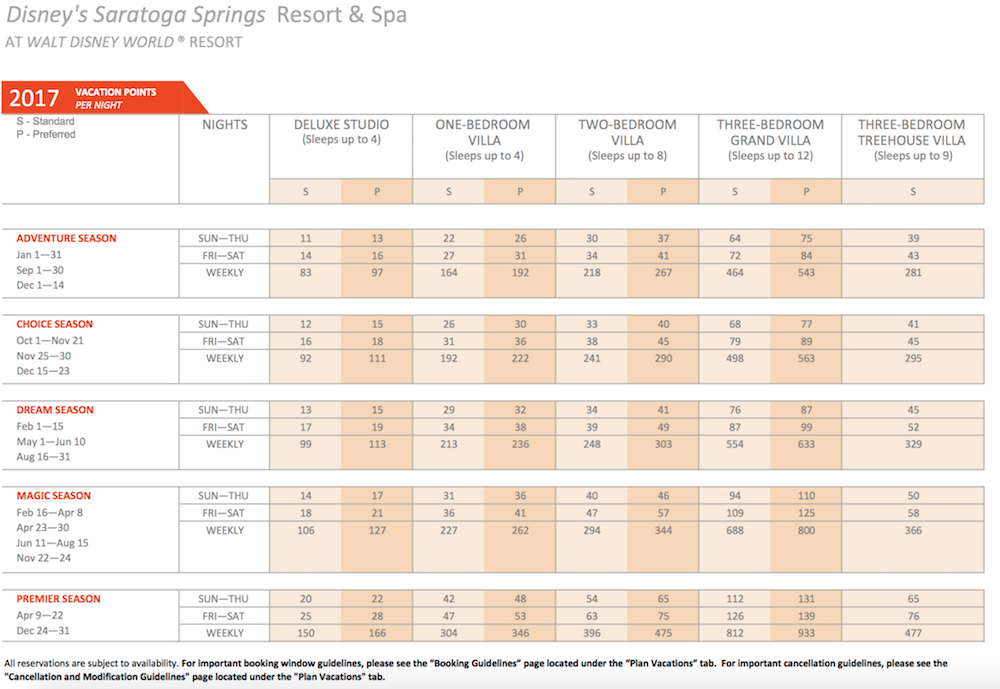 Disney Vacation Club has published the 2017 points charts to DVCMember.com.  While most resorts' values remained largely unchanged, one modification stands out above all others: Saratoga Springs is now split between Preferred and Standard View categories.

All Saratoga Springs room categories except the Treehouse Villas have Standard and Preferred values.

Disney Vacation Club did not disclose how many units will be available in each category, however the disparity between the points suggests that there will be a large number of rooms in each.  For every decrease, there must be a corresponding increase.  So while many rooms are now cheaper under the Standard View, remaining Preferred View rooms may cost significantly more points that under the older charts.

In 2016, a Two Bedroom Villa is priced at 269 points for a week during Dream Season.  Beginning in 2017 that cost changes to 248 points for Standard View and 303 points for Preferred View.

The Standard / Preferred disparity varies across different room sizes and seasons, making it difficult to predict how many rooms will be placed in each category.  Also unknown is whether entire buildings will be classified as "Standard" vs. "Preferred" or if DVC will pick and choose specific rooms within each building.

In other news, one minor change was applied to the points chart for Disney's BoardWalk Villas.  A BoardWalk View Two Bedroom Villas during Premier Season has increased from 470 points to 477 points for the full week.  Each of the 7 nights during this period was raised in price by one point.

No other changes have been identified for the other eleven Disney Vacation Club properties.

Thanks to Wil Lovato for helping with the fast analysis!