Written by Tim Krasniewski. August 22 2018 Posted in Other Resorts News 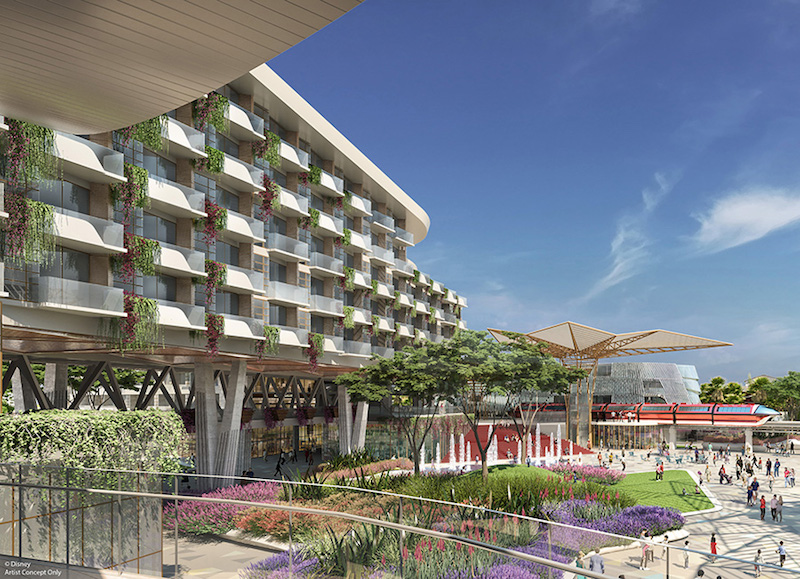 According to the Orange County Register, Disneyland and Anaheim leaders acknowledged that work on a new AAA Four Diamond hotel has been suspended indefinitely. This move relates to a series of tax incentives previouly offered by the City.

The City of Anaheim applies a Transient Occupancy Tax of 15% to the room rate of all area hotel stays. When the new Disney hotel was announced in 2016, a tax incentive program granted Disney a rebate of 70% of these tax collections over a period of 20 years. Estimates peg the incentive's value at more than $250 million over the 20 year period.

However, the resort project approved in 2016 was different from the revised plans revealed in late 2017. Designers were originally eyeing a plot of land which currently serves as parking for Downtown Disney guests. The hotel was later moved to the western side of Downtown Disney, between remaining shops and the Disneyland Hotel.

The tax incentive program was later cancelled and current city leaders are refusing to approve the revised site plan with the tax benefits still in place.

Villas at Disney's Grand Californian Hotel & Spa remains the only Disney Vacation Club property at Disneyland. The property features less than 50 villas and has been sold out for nearly a decade. Demand for points has pushed both retail prices and third-party reales into the $200 per point range. Speculation is that the new hotel would contain some additional DVC units, or that hotel rooms at the Grand Californian may be converted to DVC villas.

Work on the new hotel was scheduled to begin in July. Many businesses located within the proposed construction zone have already closed including the AMC Theaters, Rainforest Cafe and Earl of Sandwich. Speculation was that Disney would await the results of November elections to determine whether or not the incentives could be salvaged.

However, just days after the news was made public, Disney surprised city leaders by requesting an end to all current tax incentives from which they benefit.  An August 21, 2018 letter from Disneyland Resort President Josh D'Amaro called the programs “a flash point for controversy and dissension in our community.”

The move likely relates to a ballot measure which will be put before voters in November proposing that businesses benefitting from tax subsidies pay a minimum wage of $18 per hour by 2022. Ending the subsidy agreements would likely exempt Disney from this mandatory wage hike.

Recent union agreements covering about half of Disneyland's 30,000 workers includes a wage scale that escalates to more than $15 per hour.