Written by Tim Krasniewski. July 12 2011 Posted in Other Resorts News

There have been a number of recent developments concerning the vacant plot of land between the Wedding Pavilion and Disney's Grand Floridian Resort and Spa, all of which point toward construction of more Disney Vacation Club villas.

Earlier this month, Disney filed a new set of plans with the Orange County Comptroller for the cryptically-named "Project 2011-1".  Slight modifications can be noted between the original filing and these latest revisions.  Most notably, the project has been extended further into the Seven Seas Lagoon, and will include an additional acre of land not part of the original design.

Website epcyclopedia.com has posted some comparisons of the original and revised filings. 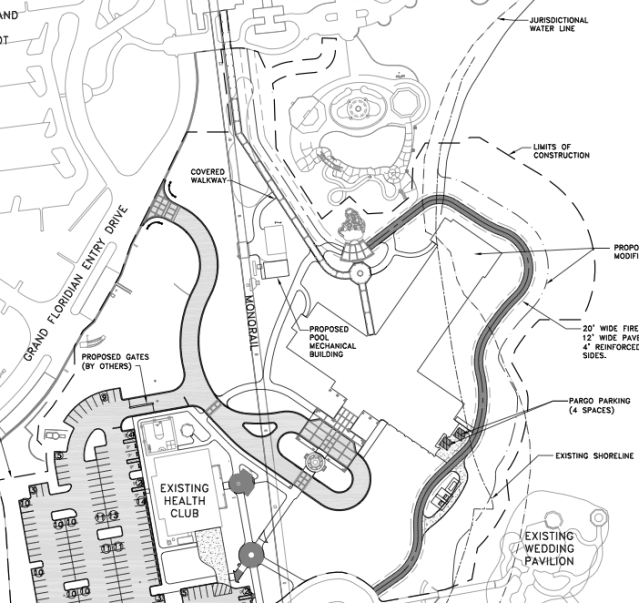 Website WDWMagic.com has published photos of construction walls erected around the site within the last several days.

Meanwhile, brides-to-be with events scheduled for this fall at the Disney Wedding Pavilion are slowly being informed of the potential impact on their ceremonies.  According to reports on the DISBoards.com, Disney is taking steps to minimize disruptions to scheduled events.

On July 17 and 18, clear pane windows in the Pavilion will be replaced with stained glass to help mask visual signs of construction.  Wedding-related activities, such as the Cinderella carriage ride, will be re-routed to avoid construction impact.  And Disney has committed to halting most construction activity during the cermonies themselves.

Disney refuses to comment on the intended use for the new facility.  However, it is worth noting that Disney has not built any new Deluxe resort accommodations since Disney's Animal Kingdom Lodge opened in 2001. New hotel construction in recent years has been limited to Value-class destinations including Disney's Pop Century Resort and the forthcoming Disney's Art of Animation Resort.

Resort construction projects at Walt Disney World typically run 2 1/2 to 3 years from groundbreaking to grand opening.  A similar timeframe for this project would result in completion in early-to-mid 2014.