Estimating when Aulani will be “sold out”

Sales for Aulani, Disney Vacation Club Villas, began on July 1, 2010. Ever since, the question has been asked: “How soon before Aulani is sold out?”

If the sales for the last eight months are any indication, it will take almost 14 years, or until mid 2024, before Aulani is sold out.

With 11,519,025 points, Aulani is second in size only to Disney's Saratoga Springs Resort & Spa in the Disney Vacation Club system. Disney Vacation Development is required to retain at least 2% of Aulani’s total points; thus, there are as many as 11,288,645 points that can be sold to the general public.

Due to limitations in the availability of some public records from the State of Hawaii, complete sales data for Aulani cannot be accessed. Thus, only estimates can be made about the resort’s past sales rate. 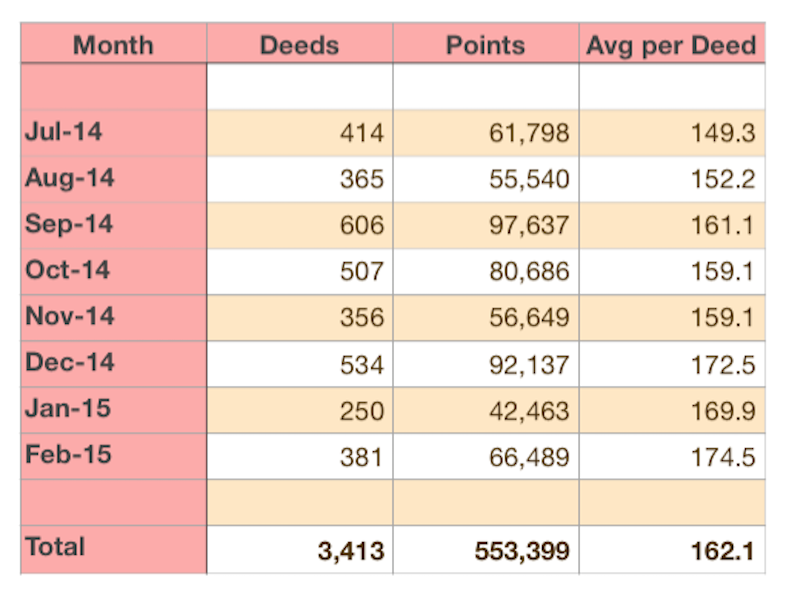 As shown in the attached chart, 553,399 points were sold during the eight months from July 2014 to February 2015, an average of 69,175 points a month. Based on this monthly average, it will take DVD about 163 months, or until early 2024 before all 11+ million points would be sold. And if Disney Vacation Development reacquires about 3.5% of Aulani points through foreclosure activity or exercising its Right of First Refusal on resale transactions — much like it has for Bay Lake Tower at Disney’s Contemporary Resort —then that date might be pushed out another six months or so.

This is only a rough estimate of how long it might take for Aulani to sell out. Future sales might accelerate or slow down. Or sales for the last eight months might not accurately reflect past sales. As with other DVC resorts, Aulani’s monthly sales numbers fluctuate wildly. In just the last eight months, Aulani sales have ranged from a high of 97,637 points to a low of 42,463 points. It is interesting to note that Aulani outsold the Villas at Disney's Grand Floridian Resort & Spa in September and December 2014.

As more data is compiled on Aulani sales, the estimated date for when the resort might be sold out will be revised and included in future DVCNews articles.