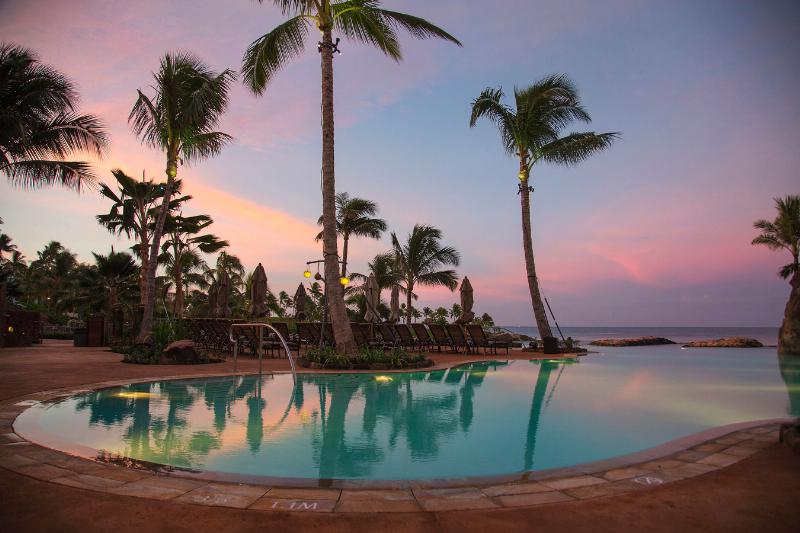 and Spa in Ko Olina, Hawaii, will welcome guests to explore a stunning new expansion of its popular Waikolohe Valley water play area: Ka Maka Landing. The new enhancement features a spectacular infinity pool with a realistic grotto, a dynamic fun splash zone for smaller kids, and a new location for poolside and beachside dining.

The expansion comes just two years after the resort first opened to guests on the island of Oahu and responds to the most enthusiastic request Aulani guests have made during their stays: more water fun and more food options to enjoy.

To help celebrate the opening on the new Ka Maka Landing, the resort has launched a special offer: 4 nights for the price of 3, plus free breakfast for two adults per day at the new Ulu Cafe. This special offer is available to book now until January 15, 2014, and is for guests who stay four consecutive nights between January 5, 2014 and April 7, 2014. To purchase the vacation package, travelers can call toll-free (866) 309-2384 or contact their local travel agent. Guests may also go online to learn more and purchase the vacation package at www.DisneyAulani.com.

"With the spectacular response Aulani received after opening, we were thrilled to have the opportunity to expand Aulani's enchanting Waikolohe Valley," explains Jeanette Lomboy, executive producer for Aulani, Walt Disney Imagineering. "In keeping with the rest of the resort, we integrated Hawaiian culture, stories and artistry into the design of the new pool area and restaurant to create an inspiring new environment for our guests."

Waikolohe Valley is the recreational center of the resort. Nestled between Aulani's two towers and flowing from the lobby down to the beachfront, it is home to pools, whirlpool spas and interactive water play areas. The name "Waikolohe" -- Hawaiian for "mischievous water" -- offers a playful nod to some refreshing surprises for guests as they float along a lazy river through the valley's eye-catching lava outcropping called Pu'u Kilo.

The new pool, splash zone and additional deck space will extend the sun and water fun to the very edge of the resort property, with the new pool's "infinity edge" overlooking the adjoining lagoon. A highlight of the new family pool is an enchanting grotto that provides a relaxing view of the sunset over the Pacific. After dark, a starscape of glimmering lights appear on the grotto ceiling.

Even Aulani's littlest guests have a place to splash around in at the new Ka Maka Landing. Keiki Cove, Aulani's tide-pool-themed water play area geared towards toddlers, is a fun and safe spot where visiting tykes can cool off in a series of low-pressure water jets that gush up from below. Keiki Cove's water jets are provided courtesy of a friendly he'e, or octopus, whose large tentacles stretch out across the cove floor in a bright and friendly blue mosaic

Also open at the resort is a new food service location. Ulu Cafe is a poolside quick service restaurant that serves breakfast, lunch and dinner, with a variety of grab and go options as well as hot entrees, daily sandwiches and soups, and specialty coffee and soft drinks.

Along with the water play and dining additions, the recent expansion provides a new, larger lawn location for events, weddings and the nighttime guest favorite, the Starlit Hui show.

About Aulani, a Disney Resort & Spa Aulani opened in August of 2011 and sits on 21 acres of beautiful oceanfront in Ko Olina, adjacent to a nine-acre, crystal-blue lagoon and white-sand beach. Ko Olina is 17 miles from Honolulu International Airport and approximately 30 minutes from Waikiki.

Uniquely designed for families and inspired by the wonders and traditions of Hawaii, Aulani is a family paradise with a touch of magic. Aulani offers kids, adults and families Hawaiian vacation experiences with a special magic that only Disney can create. Delightful rooms and spacious Disney Vacation Club villas, a perfect location on a beautiful beachfront lagoon, and renowned Disney service and enchanting entertainment let dreamers of every age savor their time together on Hawaii as never before.

For Aulani reservations, guests may visit www.disneyaulani.com or call (866) 44-DISNEY