The highly anticipated Star Wars expansion will open at Disneyland on May 31, 2019 and Disney's Hollywood Studios on August 29, 2019. 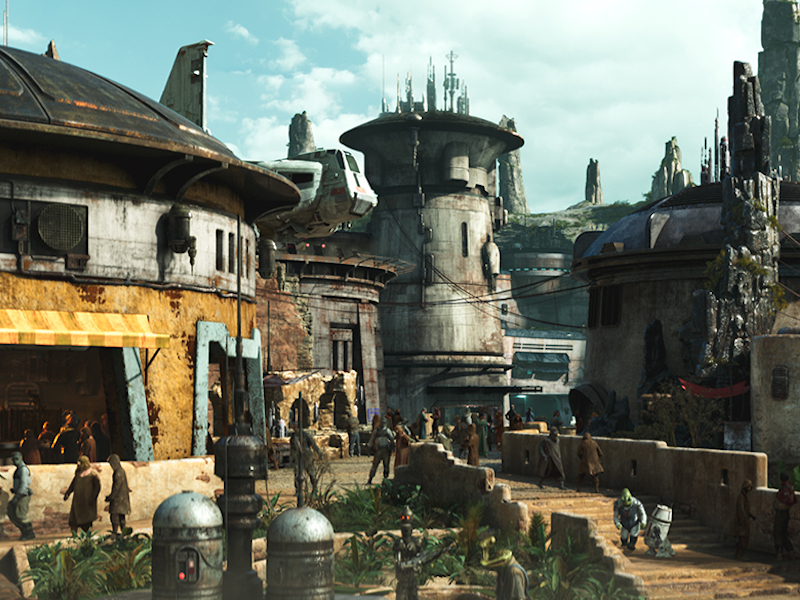 In a detailed post to the Disney Parks Blog, Disney revealed opening plans for its dual Star Wars lands. Among the noteworthy details is the revelation that the lands will open in two phases with only one of the two signature attractions available on day one. Millennium Falcon: Smugglers Run will be the sole opening day attraction with Star Wars: Rise of the Resistance following later in the year.

The decision to split the attractions was seemingly made to accellerate the opening and accommodate more guests. Disney had previously announced a "summer" timeline for the Disneyland debut and "fall" for Walt Disney World. The opening dates of May 31 out west and August 29 in the east actually beat both of these estimates.

Food, beverage and shopping venues will also be available in both lands at launch.

Guests hoping to visit Galaxy's Edge between May 31 and June 23 at Disneyland will be required to make a reservation in advance. The reservation process will be announced at a later date. Note this process will apply to guests simply wishing to enter the land--without an advance reservation, Disneyland guests will be unable to visit the new park expansion. Disneyland hotel guests, including Disney Vacation Club members staying in the Villas at Disney's Grand Californian Hotel, will be assigned one timeslot to visit Galaxy's Edge during their stay, though Disney is careful to say that the assignment does not guarantee access.

This process will not be replicated at Walt Disney World, however Galaxy's Edge will be available during Extra Magic Hours, a perk offered exclusively to guests at Disney hotels and partner resorts.

Finally, FASTPASS and FASTPASS+ will not initially be offered for Millennium Falcon: Smugglers Run at either theme park. Disney plans to monitor demand and make operational adjustments as necessary.

The earlier opening at Walt Disney World may foreshadow the debut of both Disney's Skyliner transportation system and Disney's Riviera Resort, two projects which were both ostensibly designed to address the crowds expected to accompany Galaxy's Edge.