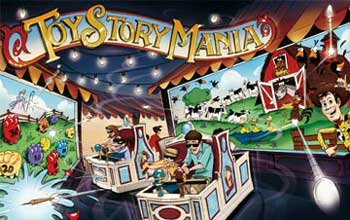 DVCNews has confirmed that Disney Vacation Club members are included in the Toy Story Mania attraction preview scheduled for May 10 - 12, 2008.

Although the news has not yet been publicly announced by the Disney Vacation Club, multiple sources have confirmed that DVC members (plus up to 3 guests) are eligible to attend the attraction preview.  Nearly a month ago Disney announced that an Annual Passholder preview would be held on May 10 to 12.  Recently Vacation Club members have also been included in such previews, but over three weeks have passed without any formal announcement from DVC.

DVCNews was able to obtain the following statement regarding DVC member inclusion in the preview:

Grab your 3-D glasses, board your ride vehicle, and zip off into a world of midway-style games hosted by Woody, Buzz, and other characters from Disney•Pixar's Toy Story films! Experience this new Disney's Hollywood Studios™ adventure during a Member sneak preview, May 10-12, 2008. Just show your Member ID Card and a photo ID at the attraction entrance from 9 am - 7 pm to enjoy the preview with up to three Guests.

Thanks to site member "bjelsasser" for assistance with this story.