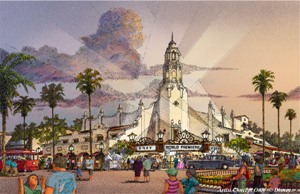 
The single largest expansion project appears to be "Cars Land", inspired by characters and locations from the Disney / Pixar animated film Cars.  The "E-Ticket" attraction which will anchor Cars Land is Radiator Springs Racers, a ride which is rumored to leverage the same technology originally developed for Epcot's Test Track.


Other new attractions include the previously-detailed Toy Story Mania! (also in development at Disney's Hollywood Studios), "major ride based on Disney's classic The Little Mermaid" and a new nighttime show entitled Disney's World of Color.  The project will also include numerous cosmetic throughout the Disney's California Adventure theme park.


Coverage is also available at the Wall Street Journal Online.