The 2021 Disney Vacation Club Condominium Association Meeting may long be remember more for comments made by members in attendance than for anything communicated by Disney executives. 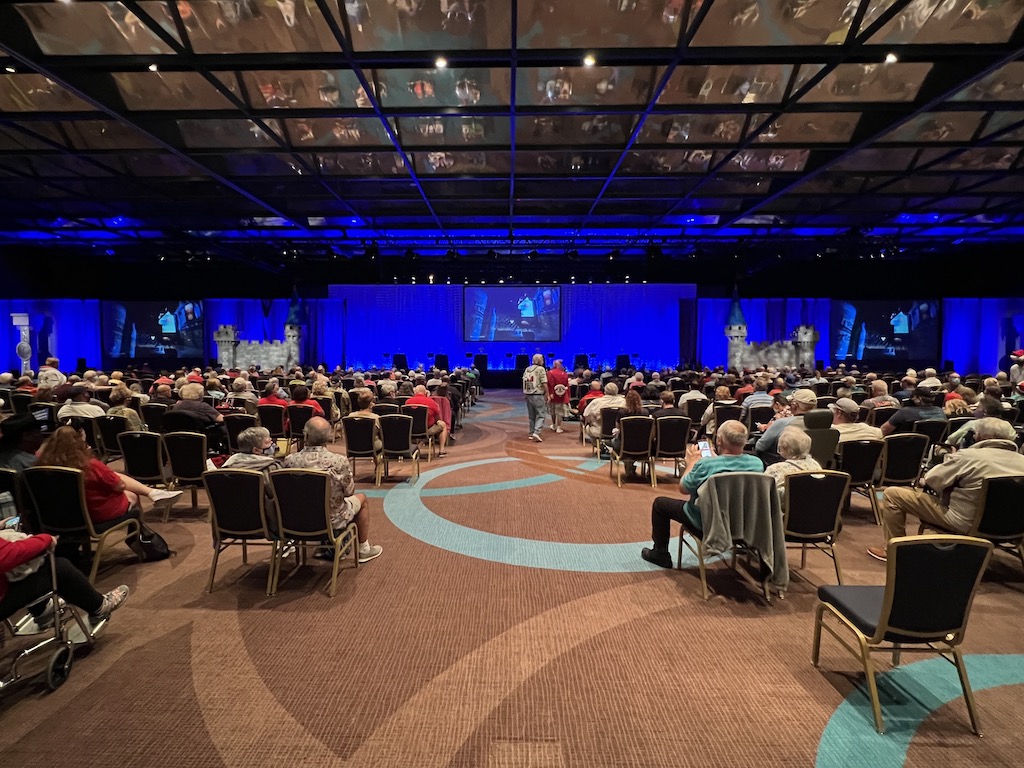 (Editor’s Note: DVCNews routinely strives to present the latest news and information in an objective format, actively avoiding personal commentary. However, we found it impossible to accurately characterize events from this year’s Condominium Association Meeting without some element of subjective analysis. Please take this into account when reading.)

For years, the December annual meetings have stood as one of the few reliable platforms for Disney Vacation Club to embrace its members. Attendees to the free event could count on a bit of pageantry, like the live fire dancers who once healded the debut of Aulani, Disney Vacation Club Villas. There would often be post-meeting character photos, free refreshments--at least one time featuring the legendary Dole Whips--and occasionally a free trading pin or other trinket. In 2019, members were bussed over to Disney's Riviera Resort for an exclusive preview just days before its grand opening.

But the hallmark of the event--the reason that members set aside 2-3 hours of vacation time to travel to Disney's Contemporary Resort—is to interact with executives. After nearly two years of seeing their vacation experiences ravaged by the COVID-19 pandemic, 2021 meeting attendees were looking for signs that there was light at the end of the tunnel. They wanted to hear how newly-minted Senior Vice President and General Manager Ken Diercksen would begin to make his mark on the program. 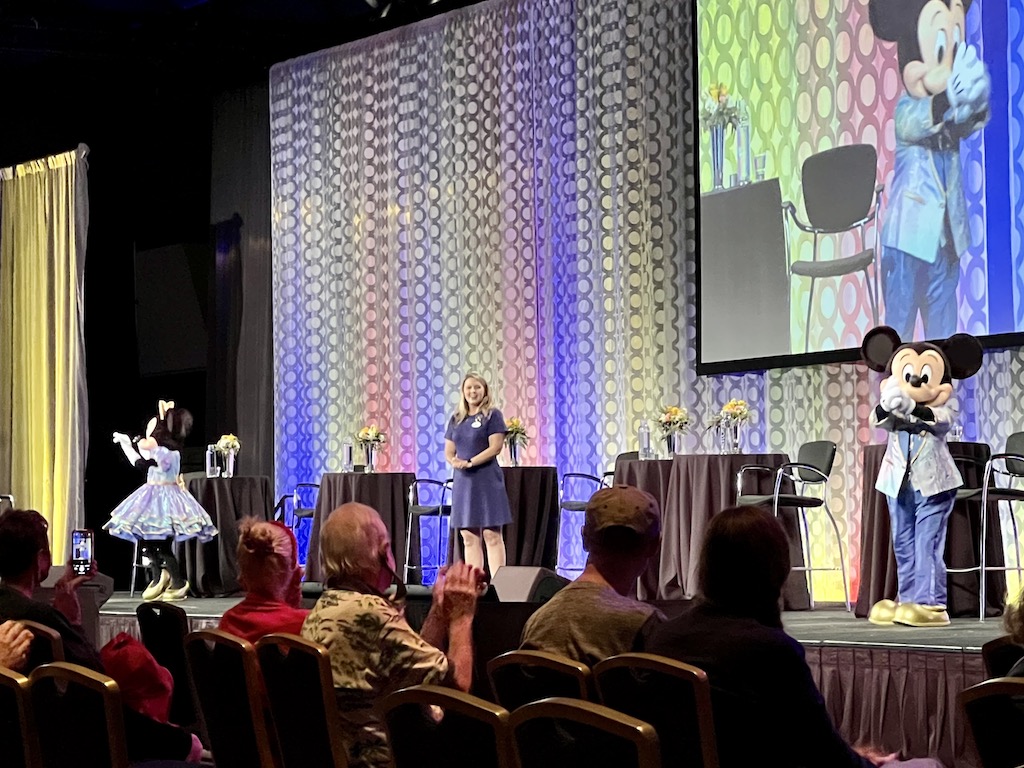 Instead, 2021 meeting attendees got a virtual repeat of the 2020 meeting, complete with a rushed meeting format, fleeting character appearances, socially distanced seating and no one-on-one interaction.

Not a single new member perk was revealed for 2022. VP of Member Experiences Shannon Sakaske recapped several one-off perks from 2021. Included were a preview of Remy’s Ratatouille Adventure and various movie screenings, events announced with such short notice that it was impossible for any member to plan around.

DVC chose not to comment on the future of the EPCOT lounge as they have in years past. Right now the DVC website still states that the lounge “is open through 2021 as part of Membership Magic.” Despite the return of Florida’s after hours Halloween and Christmas parties and announcement of similar 2022 events in California, there is no word when (or if) DVC’s exclusive Moonlight Magic will ever return. Mundane perks like pool hopping remain suspended. In 2021 DVC owners lost their discount on the 365-day annual pass and saw discounts for after hours parties slashed.  The fireworks viewing platform outside Top of the World lounge operated for two nights in July, but has remained closed for nearly half-a-year since.

Sakaske could only provide vague promises of more Membership Magic down the road. 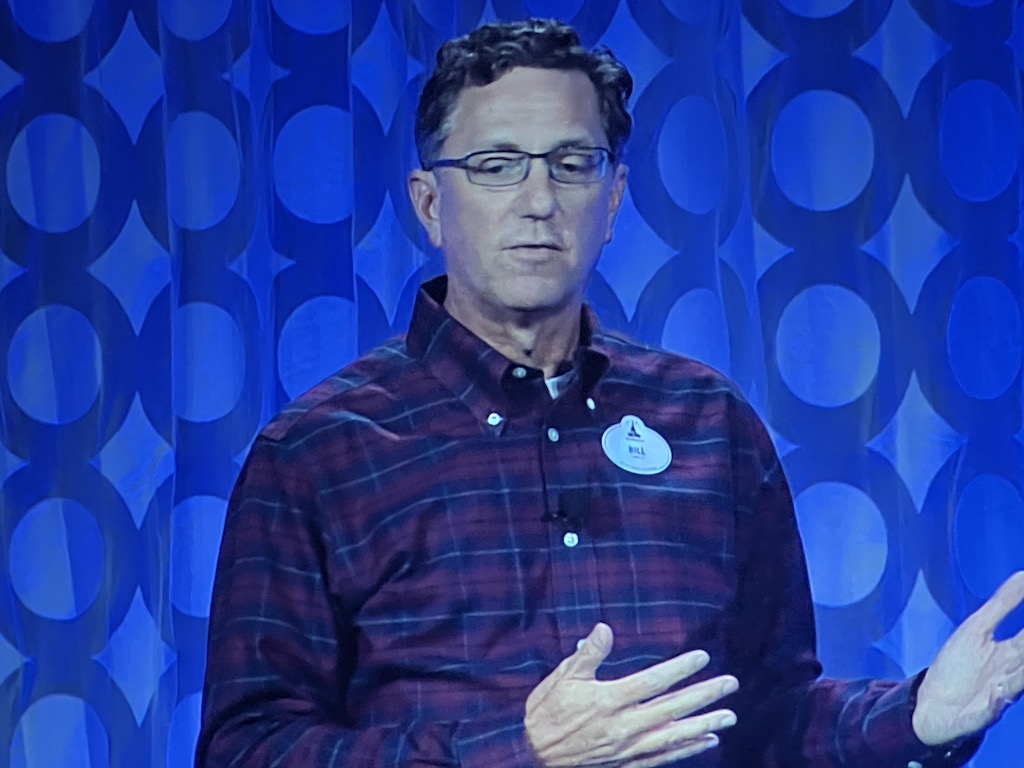 Resort refurbishment schedules are a popular topic among members who crave as much data as possible when trying to plan their
expensive vacations up to a year in advance. In the past, DVC has openly shared which resorts were scheduled for work up to 3 years into the future. In 2021, such information came in drips and drabs. There was a reference to 9 resorts having work scheduled in the coming years but no comprehensive list or timeframes provided. Only the Villas at Disney’s Grand Floridian Resort & Spa and Boulder Ridge Villas at Disney’s Wilderness Lodge were mentioned by name. Later a passing reference was made to the Villas at Disney’s Grand Californian Hotel headed toward a full refurbishment in 2024.

Annual Dues for 2022 were approved by the board, and are detailed in our prior coverage. DVC did reveal that owners of the Grand Californian would receive a credit of $1.01 per point due to savings generated by the resort closure which extended into early 2021.

The meeting’s most memorable moments occurred during a budget-centric Question & Answer session during which audience members were invited to voice their concerns.

One questioner asked about the role of “member representative,” a position held by several Disney staffers introduced earlier in the session. Bill Diercksen reiterated that the Q&A was for budget items only and would only refer the member to DVC’s new customer service portal at DisneyVacationClub.com/feedback.

(Ed note: Karen Grip has served as member representative for most of the condominium associations for several years now, while Becky Robinson and Dan Coleman share the role for the Grand Californian. As provided by the Disney Vacation Club multisite POS, individual members do not have voting rights with regard to club matters. As such, the three individuals listed have been assigned by Disney Vacation Development as proxies to vote on behalf of members. In relation to the condo meeting, their primary role is to elect the Board of Directors, an action over which DVC owners have no direct control.)

Another member posed several budgetary questions specifically related to Disney’s Saratoga Springs Resort & Spa. After making 6 requests in the span of 11 months, the member received and reviewed audited financial statements for calendar year 2020. Specifically, the board was asked why the resort spent $14 million on housekeeping in 2020 of a budgeted $19 million, when the resort was closed for “2/3 of the year.” This line of questioning continued for 10 minutes, encompassing front desk costs, recreation and other areas. Diercksen and board Treasurer Elizabeth Healy repeatedly stated that the resort was only closed for 3 months in 2020 (exact dates were March 20 through June 22) and eventually steered the discussion to other member inquiries. 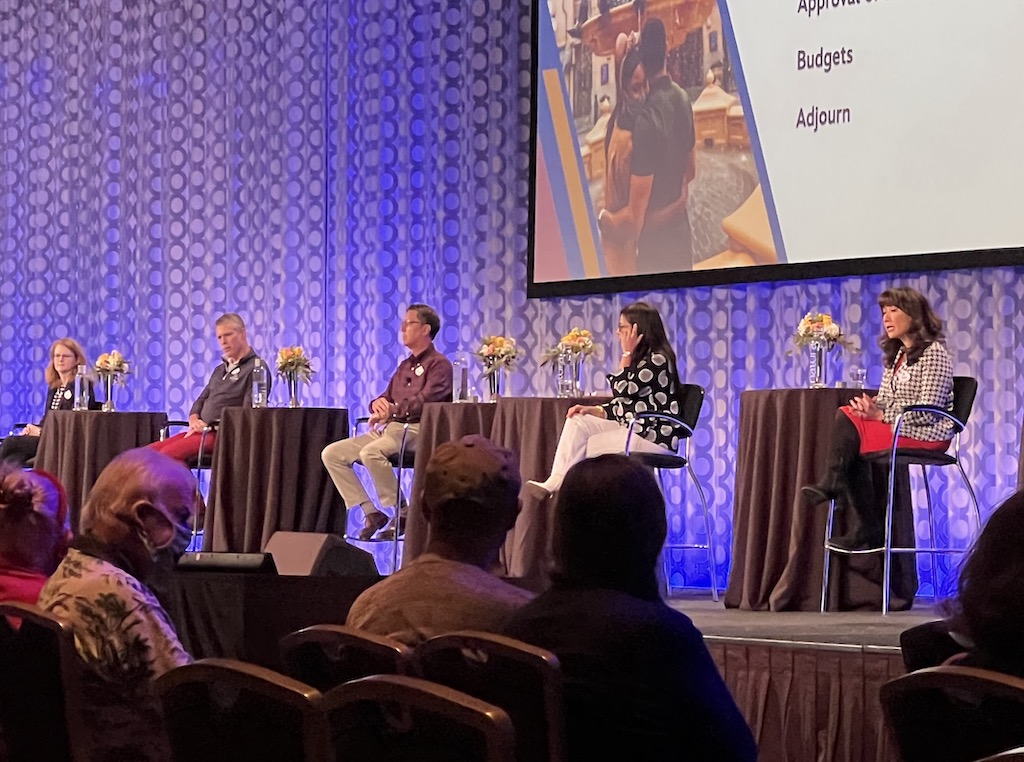 Disney Vacation Club Board of Directors

One commenter shared several recent stories of poor interaction with Walt Disney World cast members. She oopenly criticized DVC executives for the low $15 staff minimum wage in the post-COVID world, exclaiming “these salaries are atrocious and you get what you pay for.”

(Ed note: Wages are often a polarizing topic among Disney Vacation Club members, given that costs are borne directly by owners via the annual dues. A resort like Disney’s Beach Club Villas has budgeted operating expenses of $4.89 for 2022, of which DVC claims roughly 3/4 goes toward staff wages and benefits. Arbitrarily increasing staff wages by 20% could add $.75 per point to the dues, a boost of about 10% to the total dues bill.)

Diercksen acknowledged that they have been forced to increase compensation in some areas to attract new workers. However they feel their overall wage and benefit program is competitive and remains in compliance with all union agreements.

After waiting patiently for more than 15 minutes, at least 2 attendees were told they would not be able to present their questions due to the time limits dictated by the meeting’s health and safety protocols. Both members were openly frustrated by the decision, with one expressing that the Q&A was his sole purpose for attending.

The following day, Bill Diercksen sent a message to meeting attendees which read, in part:

"This year, similar to last year, we focused on promoting health and safety, creating a socially distanced environment and a more condensed program. Therefore, if you did not have the opportunity to get your questions answered at the meeting, please submit them to the Board Members and Treasurer via the [website feedback link]."

“Health and safety protocols” were repeatedly used as justification for time limits and changes to the meeting format. What remains unclear is why DVC feels that pre-vaccine safety measures from December 2020 are still necessary and how a 75 minute meeting offers greater risk than last Thursday’s 68 minute affair. 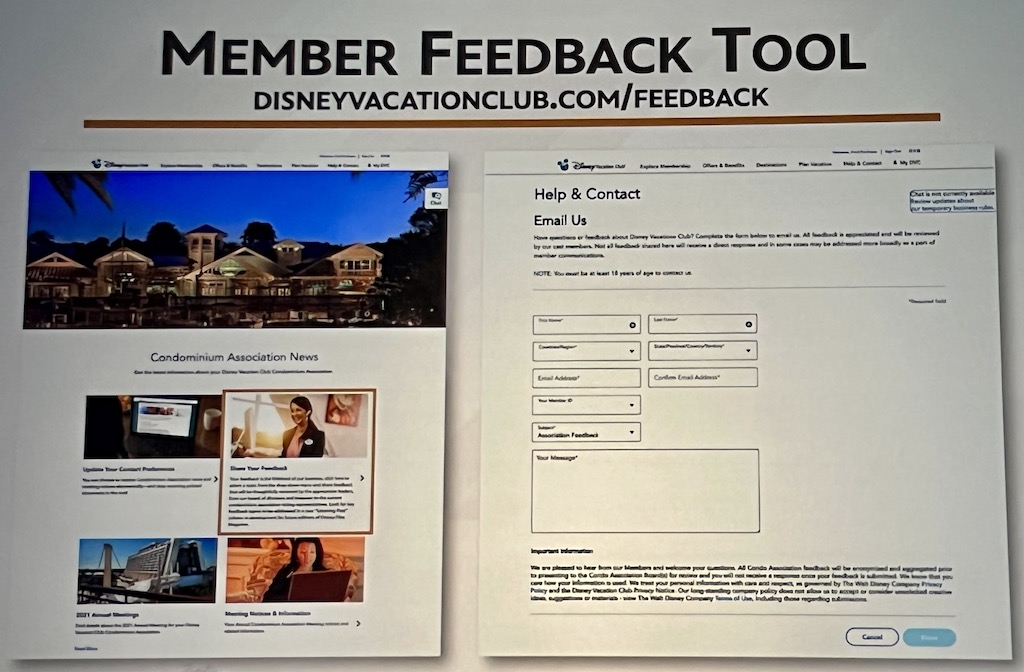 To most in attendance, there was an obvious disconnect between the meeting configuration and the current theme park and resort experience. Since Walt Disney World reopened in June 2020, this audience has witnessed theme park capacity limits significantly increased, social distancing eliminated and a return to the phrase “please move all the way into the room, filling in all available spaces.” There are no health and safety protocols preventing restaurant waitstaff from interacting with unmasked diners for an hour or more. Buffets, self serve drink towers and condiment bars are all open. Theme park ride vehicles are being filled to maximum capacity, including members from unrelated families sitting elbow-to-elbow. Resort pool capacity is not monitored, nor are lounge chairs sanitized between guests.

Less than 3 weeks prior to the DVC meeting, the Destination D23 event was held at the same Contemporary convention center. Over a period of three days, attendees participated in a variety of keynote sessions running up to 3 hours in length. Disney’s own social media accounts provided a glimpse at the environs, which seemingly featured much higher attendance than the DVC meeting with zero social distancing.

About 400 Members interrupted their vacations to attend the Disney Vacation Club annual meeting. Some deliberately scheduled trips to coincide with the event. Clearly these are some of the most dedicated—most personally invested—owners in the Club. For about 90 minutes per year, DVC has an audience with this group of avid fans, many of whom want nothing more than to leave the room feeling better about their DVC membership than when they arrived. When selling five-figure timeshares, every bit of good will is an asset. DVC owners who feel welcome and appreciated have the potential to increase their own investment and use their own positive experiences to help recruit other owners. Member appreciation can take many forms. Given that the meeting was devoid of any tangible perks planned in the near term, a simple willingness to listen to member concerns would have gone a long way.

On Thursday, December 9, one must wonder how many left the 2021 Condominium Association Meeting feeling better about Disney Vacation Club membership than before they arrived.

The next Condo Association Meeting is scheduled for Thursday, December 8, 2022.