A hole in the Disney Cruise Line schedules for summer 2015 strongly suggests another late-August Member Cruise to the Bahamas.

Cruise ship Disney Dream runs a fairly regular schedule in 2015, alternating between 3-night cruises which depart on Thursdays and 4-night Monday departures.  Because of thise regularity, it's easy to spot any variances in the schedule.

One of those variances happens to fall the week of during the last week of August.  The upper half of the image below depicts a cruise brochure issued by Disney Cruise Line citing a 4-night Bahamian Cruise departing on Monday 8/24.  However, when DCL recently began accepting reservations for the 2015 summer season, the August 24 sailing was suddenly unavailable. 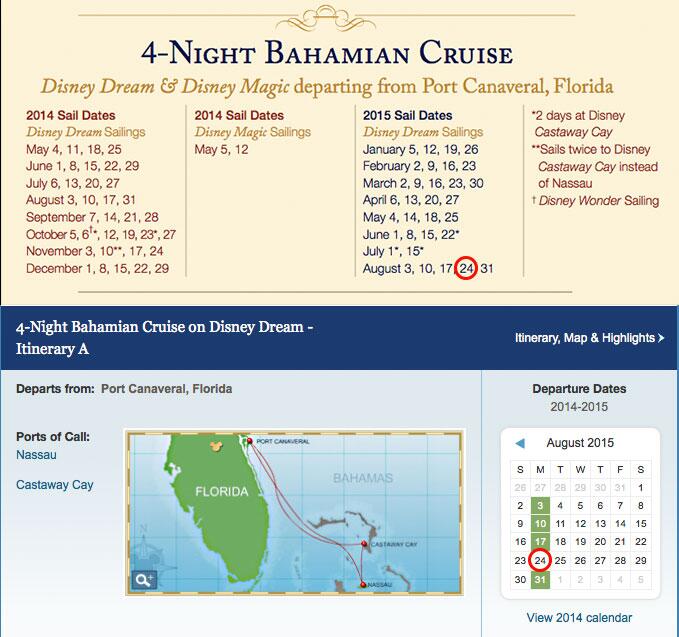 Coincidentally the 2014 S.S. Member Cruise is also scheduled to depart on August 24 (the 2014 DCL schedule has most 4-night cruises departing on Sundays.)  Disney Cruise Line voyages can be privately chartered by other organizations but the similarity in dates between 2014 and 2015 strongly suggest a Disney Vacation Club member exclusive sailing.

Assuming past practices are followed, expect the 2015 Member Cruise to be announced during the 2014 voyage with reservations accepted in October or November '14.