The 2022 final tax bills for the Disney Vacation Club resorts at Walt Disney World have not yet been released, but initial numbers suggest that property taxes are going up. 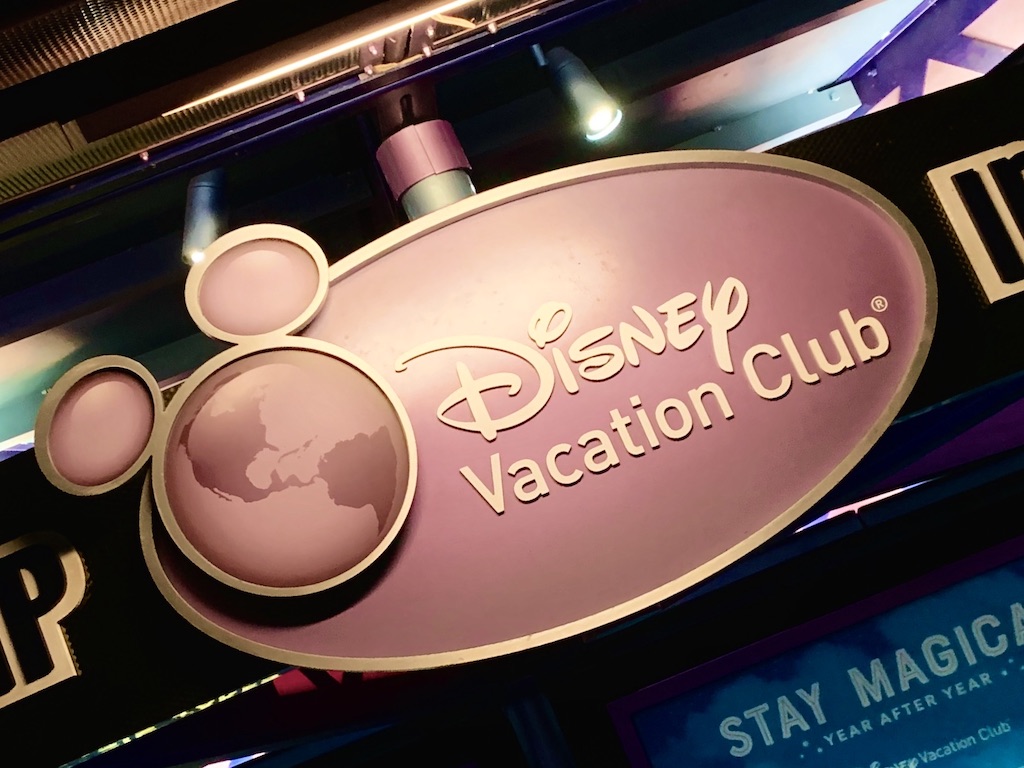 Each DVC resort’s property taxes are dependent upon two factors:  the appraisal value set by the Orange County Property Appraiser and the millage rates set by the taxing authorities in whose jurisdiction the resort resides.

The chart below shows shows each resort’s appraisal values for 2021 and 2022, which represent the market values of each resort.  It also shows an assessment value for 2022.  If the appraisal value for a non-homestead property, such as a timeshare, increases by more than 10% in a year, some taxing authorities offer an exemption capping the property’s assessment at 10% for the purpose of computing taxes owed to that authority.   The “10% cap” does not apply to the school district taxes but does apply to Orange County taxes, city taxes, Library taxes, South Florida Water Management District taxes, and Reedy Creek Improvement District taxes.

For example, Disney’s Animal Kingdom Villas has a 2022 appraised value of $440,907,705, which is 17.6% more than its 2021 appraisal.  This is the assessment that will be used to compute the school district taxes.  However, when computing the property taxes for the other five taxing authorities, Animal Kingdom Villas will be capped at $412,248,598, which is a 10% increase over its 2021 value. 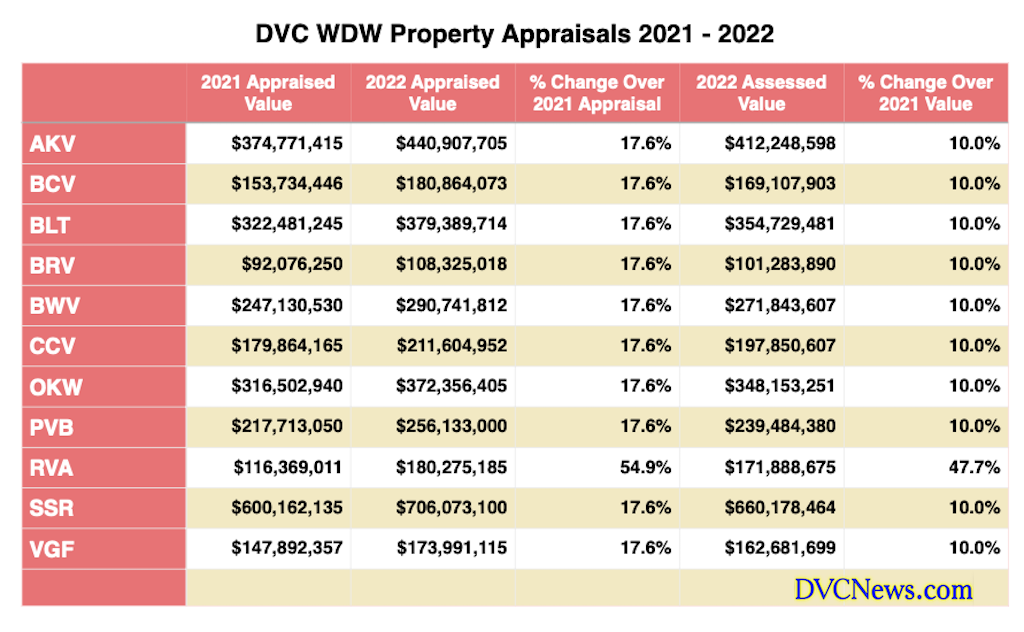 Disney’s Riviera Resort is not yet fully declared and had more inventory added since the 2021 appraisal was made.  Thus, its assessment value is not limited to a 10% cap as other fully declared resorts. The fact that more Riviera points have been declared will help absorb much of the increase in value; individual Riviera owners should not expect a 47% increase in property taxes year-over-year.

In addition to its property appraisal value, a resort’s tax bill is dependent on the millage rates set by the taxing authorities in whose jurisdiction the resort resides.  Each DVC resort is subject to taxes levied by seven taxing authorities, including a city property tax.  Disney's Old Key West Resort and Disney's Saratoga Springs Resort & Spa are taxed by the City of Lake Buena Vista, while the other nine resorts are subject to taxation by the City of Bay Lake.

It will be several weeks before each taxing authority’s millage rate for 2022 is finalized.  However, based on past practice, the proposed rates shown in the chart below will likely remain unchanged. 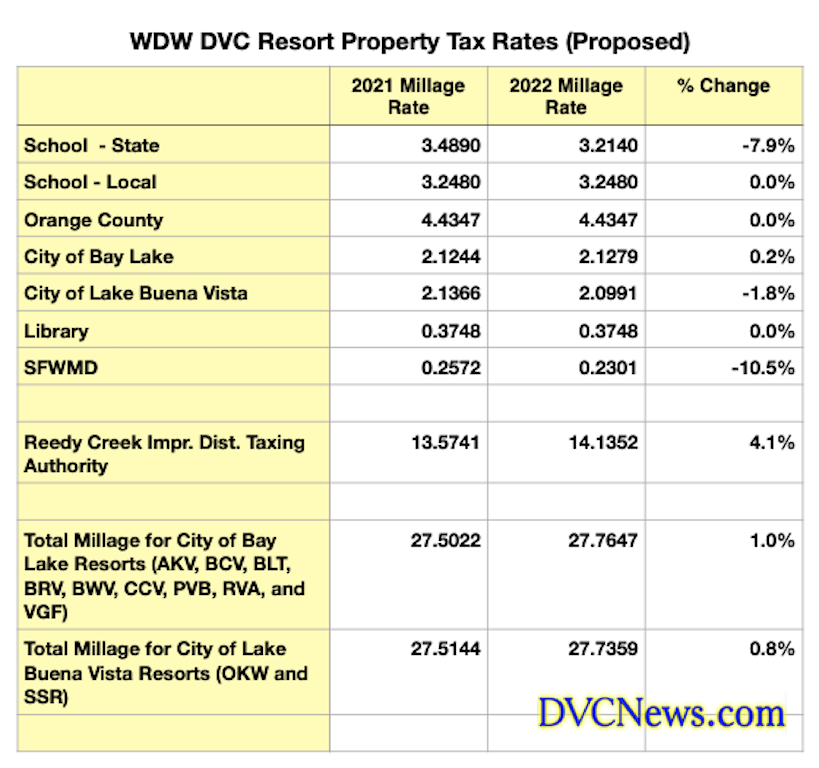 Three taxing authorities — School-State level, City of Lake Buena Vista, and South Florida Water Management District — are lowering their millage rates.  Three other authorities — School-Local level, Orange County, and Library — are keeping their rates the same.  The City of Bay Lake is increasing its rate by 0.0035 per $1,000 of assessed value.  Reedy Creek Improvement District, which accounts for more than half of the total tax rate for the DVC resorts, is raising its rate by 0.5611 per $1,000 assessed value.

For the first time in 2022, the Orange County Property Appraiser split the Reedy Creek millage rate of 14.1352 into two parts: an Improvement District portion of 9.4952 and a Debt Service portion of 4.6400.    Debt Service has always been part of the RCID tax rate but was never identified as a separate item until now.

On June 30, 2023, the Reedy Creek Improvement District is scheduled to be dissolved by the State of Florida.  The taxes levied by RCID are for its operations and debt through 2022.  No public information has been released as to how RCID’s operations and debt service will be handled after its dissolution next year.

The final tax bills are expected to be released in October.  When they are available, DVCNews will calculate the property tax amounts for 2022 and compare them with estimates from December 2021.  This apparent increase in taxes for the 2022 calendar year does not necessarily suggest that members will owe additional monies. That determination will be based upon the accuracy of DVC's tax projections made at the time that 2022 Annual Dues were computed.